2. Consider the following statement (s) related to the Manusmriti
1. Smritis dealt with the performance of duties, customs and laws prescribed according to Dharma.
2. Consists mainly of dialogues between the Buddha and his followers.
Which of the above statement (s) is/are correct?
A) Only I
B) Only II
C) Both I & II
D) Neither I nor II

4. Which of the following is/are poetry and drama?
A) Kumarasambhava
B) Raghuvamsa
C) Abhijnanashakuntalam
D) All of the above


5. Which was the world- famous treatise of the amorous arts?
A) Kamasutra
B) Vemanasatakam
C) Both A & B
D) Neither A & B

6. Which of the following Assamese literature is Buddhist songs composed in the 8th to 12th centuries?
A) Charyapadas
B) Kotha Ramayana
C) Drona Parva
D) None of the above 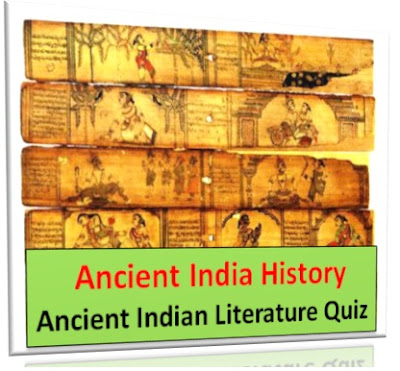 8. Which ancient literature contains short stories that have the priceless treasure of morality and knowledge?
A) Panchtanra
B) Hitopdesha
C) Mahabharata
D) None of the above


9. Which is a treatise on the science of governance?
A) Mahabharata
B) Ramayana
C) Kautilya’sArthshastra
D) Chandrawati Ramayana

10. Who among the following 8th century Sanskrit poet wrote Gandavadha which describes the exploits of Yasoverman (king of Kanyakubj) ?
A) Vagabhatta
B) Vemana
C) Vidyapati
D) Vakpati

12. Consider the following statement (s) is/are related to the historical literary sources of Ancient India
I. The ‘Puranas’ serves as a source of historical facts of ancient India. There are eighteen Puranas. They provide historical information of various dynasties.
II. According to Dr. R. C. Majumdar, the war occurred in 1000 BC Apart from the Kurukshetra war, the Mahabharata contains various accounts of social life and religious thinking of the people of ancient India.
Which is/are correct statement (s)?
A) Only I
B) Only II
C) Both I and II
D) Neither I nor II

13. Find the correct pair of Poet in the Court of the King during Ancient India
A) Vasumitra :Kanishka
B) Harisena : Chandragupta II
C) Kalidasa :Samudragupta II
D) Banabhatta :Pulkesin II


14. Consider the following statements regarding the age of Vedic Civilisation:
I. Bal Gangadhar Tilak, on astronomical grounds, dated Rig Veda to .6000 BC to Harmon Jacobi, Vedic civilization flourished between 4500 BCand 2500 BC and the Samhitas were composed in the latter half of the period.
II. Famous Sanskritist, Winternitz felt that the Rig Veda was probably composed in the third millennium BC.
Which of the following statement(s) is/are not correct?
A) Only I
B) Only II
C) Both I and II
D) Neither I nor II

16. Which of the following statement (s) is/are correct about Panini's great grammar the Ashtadhyayi?
A) It was most probably composed towards the 4th century BC
B) It was stated that with Panini the language attained its highest state of development and thereafter there was improvement only in its vocabulary.
C) Both A & B
D) None of the above

20. Which of the following statement (s) is/are correct about ancient Indian literature?
A) The Puranas is important as they were the main influence in the development from early Vedic religion to Hinduism.
B) The Shastras contained works of science and philosophy.
C) The Bhagvad Gita a later addition to the Mahabharata enshrines a philosophical doctrine and in it are described the three paths to salvation: karma, gyan and bhakti.
D) All of the above

21. Who has given the treatise on the rule of the Pandyan kingdom by Pandala a daughter of Herakles?
A) Megasthenes
B) Kautilya
C) Banabhatt
D) Kalidas

22. Who among the following renowned Scholar wrote the biography of King Harsha and Kadambari?
A) Bharavi
B) Bhartrihari
C) Bana
D) Magha

23. Which of the following Ancient Indian literature was a treatise on the science of governance?
A) Manusmriti
B) Arthsashtra
C) Mahabharata
D) None of the above

24.Which of the following Sangam Text is the collection of 100 songs of VilambiNaganaar and deals conditions / emotions of 4 types of people who cannot sleep in the night and they are thief, lovelorn, after money, and worrying about losing money?
A) Nanmanikkatiga
B) Acharakkovai
C) Thirikatukam
D) KalavazhiNarpathu

25. Which of the following Tamil literature was written by IlangoAdigal, brother of Senguvattan, a Chera King and who was a Jain monk is a highly regarded epic?
A) Kainnilai
B) Elathi
C) Silappatikaram
D) None of the above

26. Which was/were the greatest poetry and drama work of Kaildas?
A) Kumarasambhava
B) Raghuvamsa
C) Meghaduta
D) All of the above

27. Which ancient account describes the Nandas expedition over all their rival monarchs that make them powerful rulers of North India?
A) Manusmriti
B) Vedas
C) Puranas
D) Brahamanas

28. Which Buddhist literature consists of dialogues between the Buddha and his followers?
A) MilndaPanha
B) Sutta Patika
C) Vinayapitaka
D) Buddhhacharita

29. Which of the following ancient treatise was the great Buddhist work consisting of dialogues between the Indo-Greek King Menander and the Buddhist philosopher Nagasena?
A) MilndaPanha
B) Sutta Patika
C) Vinayapitaka
D) Buddhhacharita

30. Consider the following statement (s) is/are related to the Smritis: I. It deals with the performance of duties, customs and laws prescribed according to Dharma II. It is concerned mainly with the rules of the organization of the monasteries. Which of the above statement (s) is/are correct?
A) Only I
B) Only II
C) Both I & II
D) Neither I nor II