In this educational section we are going to share some important questions based on Indian Ancient History i.e. Ancient India History India Objective questions. These questions is very useful for all candidates who want to prepare for the various competitive exams.

2. Who among the following rulers was first to embrace Buddhism?
(a) Ashoka
(b) Ajatasatru
(c) Bindusara
(d) Bimbisara

3. The Kailasha temple is located in the caves of
A) Ajanta
B) Ellora
C) Elephanta
D) Karle

4. The words SatyamevaJayate in the State Emblem adopted by the Government of India have been taken from which Upanishad?
A) Aitareya Upanishad
B) Mundaka Upanishad
C) Adhyatma Upanishad
D) Prasna Upanishad

6. The people of Harappa and Mohenjo-Daro culture belonged to the
A) New Stone Age
B) Copper Age
C) Iron Age
D) Chalcolithic Age 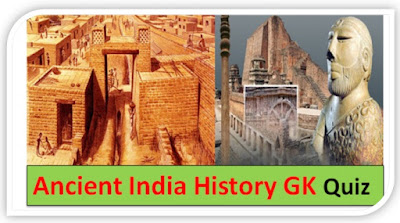 7. Match List-I (Dynasties) with List-II (Capitals) and select the correct answer codes given below the

8. The Rathas of Mahabalipuram, the rock- cut architecture, were built by a king of the dynasty of
A) Chola
B) Hoysala
C) Pallava
D) Rashtrakuta


10. The building of the famous Kailasa temple at Ellora was executed under the Rashtrakuta king
A) Amoghavarsha-I
B) Govinda-III
C) Indra-III
D) Krishna-I Ams:D 11. The Jaina saint credited with the spread of Jainism in Karnataka (south India)
was:
A) Bhadrabahu
B) Adinatha
C) Parshvanatha
D) Mahavira

13. The varnas came to be transformed into the hereditary castes during the:
A) Later Vedic period
B) Gupta period
C) Mauryan period
D) Vedic period

14. In which one of the following do we come across a detailed account of the municipal administration of Mauryas?
A) The Arthashastra of Kautilya
B) The account of Megasthenes
C) The Mudrarakshasa
D) Mauryan inscription

15. Consider the following statement(s) what Ajanta Painting portray
I. Buddhist elements
II. Secular aspects
III. Jain culture
Which of these statements is/are correct?
A) Only I
B) Both I and II
C) I, II and III
D) Only III

16. The Mehrauli pillar inscription belongs to the period of the:
A) Mauryas
B) Kushanas
C) Sungas
D) Guptas

17. Which one of the following mentioned division of the Mauryan Society into seven classes?
A) Ashoka's Edicts
B) Indica
C) Kautilya'sArthshastra
D) Vishnu Purana


18. Which one of the following pairs is NOT correctly matched?
A) Hoyasalas :Dwarasamudra
B) Kakatiyas : Warangal
C) Pallavas :Devagiri
D) Chalukyas : Kalyani

20. Which one of the following works deals with the history of Kashmir?
A) Gaudavaho
B) Harshacharita
C) Rajatarangini
D) Vikramankadevacharita

21. The Veda that contains charms and spells toward off evils and diseases is
A) Rigveda
B) Atharvaveda
C) Samaveda
D) Yajurveda

22. Who is said to be responsible for the spread of Jainism in Karnataka?
A) Ajatashatru
B) Chandragupta Maurya
C) Bimbisara
D) Mahapadma Nanda

23. Which of the following statements about the Harappan people is incorrect?
A) The Harappans were phallus worshippers.
B) They worshipped gods in the form of human beings.
C) They placed their gods in temples.
D) They looked upon the earth as a fertility goddess.

24. What were the crops raised by the Harappans? I. Cotton II. Wheat III. Barley IV. Peas Select the correct answer from the codes given below:
A) I, II, III and IV
B) I, II and III
C) II, III and IV
D) II and III

25. Which of the doctrines of Jainism was added by Mahavira?
A) Do not speak a lie.
B) Observe continence.
C) Do not commit violence.
D) Do not steal.

26. The Pitaka that contains pronouncements attributed to the Buddha, laying down numerous rules for the conduct of the order is:
A) VinayaPitaka
B) Sutta Pitaka
C) AbhidhammaPitaka
D) All the three Pitakas

28. In what respect did Jainism differ from Buddhism?
A) In its stress on the doctrine of ahimsa
B) In denying the authority of the Vedas
C) In opposing animal sacrifice
D) In its attitude towards trade

29. Who among the following occupied the supreme position in the Later Vedic pantheon?
A) Indra
B) Prajapati
C) Agni
D) Varuna

30. Which type of pottery was most popular with the Later Vedic people?
A) Black-slipped Ware
B) Black and Red Ware
C) Painted Grey Ware
D) Red Ware

32. The traces of Janapadas and Mahajanpadas are found in___?
A) Vedic text
B) Buddha text
C) Jaina text
D) All the above

33. During the Gupta Empire, the term “UPARIKARA” was used for
A) An extra tax levied on all subjects.
B) Periodic supplies of fruits, firewood, flowers etc
C) It was a voluntary offering by people to the king.
D) King’s customary share of the production normally amounting to 1/6th of the production.

34. Champa was the capital of which one of the following Mahajanapadas in Ancient India?
A) Anga
B) Magadha
C) Vajji
D) Kasi

36. Harihara Raya I who ruled the Vijaynagara Empire for the period 1336-1356 belonged to which dynasty?
A) Sangama Dynasty
B) Saluva Dynasty
C) Tuluva Dynasty
D) Aravidu Dynasty

37. Which one of the following was the capital of Kosala?
A) Sravasti
B) Shuktimati
C) Kaushambi
D) Indraprastha

38. Bimbisara was the founder of which one of the following dynasties?
A) Nanda
B) Haryanka
C) Maurya
D) Shunga

39. Tuluva Narasa who ruled the Vijaynagara Empire for the period 1491-1503 belonged to which dynasty?
A) Sangama Dynasty
B) Saluva Dynasty
C) Tuluva Dynasty
D) Aravidu Dynasty


41. Which of the following statement is/are correct?
I. Pulakesn I was the first ruler of the Chalukya dynasty?
II. Harshavardhana attacked the Chalukya territory during 608-642 AD?
III. Vikramaditya I died in 608 A.D.
Code:
A) All are correct
B) Only I
C) Only II,III
D) Only I, III

42. Who was the ruler of the kingdom between the rivers Jhelum and Chenab?
A) Alexander the Great
B) Darius III
C) King Porus
D) Chandragupta Maurya

44. Who was the main male God worshipped by Indus people?
A) Lord Vishnu
B) Vishnu
C) Brahma
D) Indra

45. Which among the following is a place in Larkana district of Sind province in Pakistan?
A) Alamgirpur
B) Harappa
C) Rangapur
D) Mohenjo-Daro

46. Who among the following was worshipped during Early Vedic Civilization?
A) Varuna
B) Indra
C) Surya
D) All the above

47. Who was the first Indian ruler who had territory outside India?
A) Ashoka
B) Chandragupta Maurya
C) Kanishka
D) Huvishka

48. Which king started the organization of Kumbh fair at Allahabad?
A) Harshavardhana
B) Dhruvasena Ii
C) Narshimhvarman
D) Akabar

50. Which among the following Kavya of Sanskrit, deal with court intrigues & access to power of Chandragupta Maurya?
A) Mrichhakatika
B) Ritusamhara
C) Kumarasambhava
D) Mudrarakshahsa

51. Who was the last Hindu emperor of northern India?
A) Harsha
B) Pulakesin II
C) Rajyavardhana
D) Skandagupta

52. Which of the following statement is/ are correct?
I. In the 326 BC Alexander invaded India
II. Ambhi (king of Taxila. welcomed Alexander and his men
III. Alexander died in 332 BC
Code:
A) All are correct
B) Only I, III
C) Only I, II
D) II, III

53. Which empire lasted the longest among the following?
A) The Palas
B) The Pratiharas
C) The Rashtrakutas
D) The Senas

54. What led to the end of Indus Valley Civilization?
A) Invasion of Aryans
B) Recurrent Floods
C) Earthquakes
D) All the above

55. Where were the hymns of Rigveda composed?
A) Punjab
B) Gujarat
C) Rajasthan
D) Uttar Pradesh

56. Which of the following statement is wrong?
A) Sunga dynasty was founded by pushyamitra
B) Ashoka the great Mauryan king died in 332 BC
C) Ashoka invaded the kalinga in 261 BC
D) Chandragupta Maurya earned the title of the Liberator.

57. Upnishads are books on :
A) Politics
B) Philosophy
C) Medicine
D) Social life

59. On which of the following systems of Hindu Philosophy , Shankaracharya wrote commentary in 9th century AD?
A) Sankhya
B) Vaisheshika
C) Yoga
D) Uttarmimansa

60. Which among the following is not a correct pair?
A) Ellora Caves – Rastrakuta Rulers
B) Mahabalipuram – Pallava Rulers
C) Khajuraho – Chandellas
D) Elephanta Caves – Mauyra Era