The Bhakti movements is basically based on theistic devotional trend in medieval Hinduism. In this time there are several saint came and sing or write various poem or article on Hindu God. This section contain various types of objective questions and answers on Bhakti Movements i.e. Ancient India Bhakti Movement Questions. Such types of questions frequently asked in various entance exams like SSC, Vyapam, PSc, UPSC, Railway, TET, CET etc.


1. Who among the following Bhati Saints was responsible for founding many punyakshetras along the length and breadth of India, by taming avatars of Parvati and imprisoning her essence in Sri Chakras?
A) Shankaracharya
B) RamanadaSaraswati
C) Tulsidas
D) Valmiki

2. Who among the following Bhakti Saints was part of the egalitarian, personalized Varkaridevotionalism tradition?
A) Ramananda
B) Kabir
C) Mirabai
D) Tukaram

3. Who among the following was the reformer and philosopher from Ramanandi Sampradaya in the lineage of JagadguruRamanandacharya renowned for his devotion to the Lord Shri Rama?
A) Ramananda
B) Tukaram
C) Valmiki
D) Tulsidas


4. Who was the the founder of the Ramanandi Sampradaya, the largest monastic Hindu renunciant community in modern times?
A) Ramananda
B) Tukaram
C) Mirabai
D) Kabir

5. Who among the following was born into a Rathore royal family of Kudki district of Pali, Rajasthan and was a 16th-century Hindu mystic poet and devotee of A. Krishna?
A) Ramananda
B) Mirabai
C) Tukaram
D) Kabir


6. Which Bhakti Saints venerated in Sikhism, as well as Hindu warrior-ascetic traditions such as the Dadupanthis and the NiranjaniSampraday that emerged in north India during the Islamic rule?
A) Ramananda
B) Eknath
C) Mirabai
D) Namdeva


8. Which ascetics of the Yoga school of Hindu philosophy influenced the Ramananda?
A) Kabirpanthi
B) Krishna Cult
C) Nathpanthi
D) None of the above 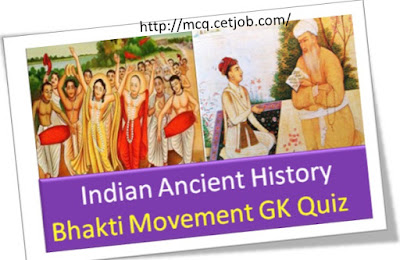 9. Which of the following Bhakti Saints Krishna is a yogi and lover?
A) Ramananda
B) Tukaram
C) Mirabai
D) Kabir

10. Who was the writer of Rukmini SwayamwarHastamalak, which was comprised 764 owees and based on a 14-shlok Sanskrit hymn with the same name by Shankaracharya?
A) Ramananda
B) Eknath
C) Mirabai
D) Tukaram
Ancient India Bhakti Movement Questions
11. Who exhorted people to give up selfishness, falsehood and hypocrisy and to lead a life of truth, honesty and kindness?
A) Vallabhacharya
B) Guru Nanak
C) Kabir
D) Nimbarka

12. Who among the following propagated Dvaita or dualism of Jivatma and Paramatma?
A) Vallabhacharya
B) Madhava
C) Merabai
D) Nimbarka

13. Who among the following preached gospel of love?
A) Gnandeva
B) Namadev
C) Ekanath
D) Kabir

14. Which of the following Bhakti Cult preached under the Pallavas, Pandyas and Cholas?
A) SaivaiteNayanmars
B) VashnavaiteAlwars
C) Both A & B
D) Advaita

15. Which saint and reformer of Bengal who popularized the Krishna Cult?
A) Vallabhacharya
B) Madhava
C) Chaitanya
D) Nimbarka


16. Which of the following aspect of Bhakti Movement was common with Sufism?
A) Monotheism or belief in one God
B) Equality and brotherhood of man
C) Rejection of rituals and class Division
D) All of the Above

17. Which of the following Bhakti saint of Maharashtra responsible for creating a background for Maratha nationalism and also opposed all social distinctions?
A) Gnandeva
B) Namadev
C) Ekanath
D) Tukaram

18. Which of the following Bhakti Reformers influenced by the preaching of Sufi teachers?
A) Ramananda
B) Kabir
C) Nanak
D) All of the above

19. Who wrote a commentry of Bhagvat Gita called Gnaneswari?
A) Gnandeva
B) Namadev
C) Ekanath
D) Both A & B

20. The concept of Sagunabrahmana was the outcome of which concept of Bhakti Movement?
A) Nirgunabraman
B) Vaishanavism
C) Shaivism
D) None of the above

21. Who among the following propagated Dvaita or dualism of Jivatma and Pramatma in Kannada region?
A) Mirabai
B) Nimbarka
C) Vallabhacharya
D) Madhav

22. Which of the following is related to the concept of Nirgunabrahman?
A) Advaita
B) Visisthadvaita
C) Both A & B
D) Neither A nor B

23. Who was the founder of the Bhakti Movement in Maharashtra in 13th Century?
A) Namadev
B) Ekanatha
C) Tukaram
D) Gnanadeva

24. Consider the following statement (s) related to the Bhakti Saint Ramanuja I. He preached Visishtadvaita. II. He said that the ‘God is Sagunabrahman’. Which is/are correct statement (s)?
A) Only I
B) Only II
C) Both I & II
D) Neither I nor II

25. The SaivaiteNayanmars and Vashanavaite Alwar preached the Bhakti Cult under which of the following rulers?
A) Pallavas, Pandyas and Cholas
B) Pallavas, Cheras and Rashtrakutas
C) Pallavas, Vijaynagar and Bahmani Kingdoms
D) Cheras&Pandavas

26. Consider the following statement (s) related to the Bhakti Saint Chaitanya I. He popularised the Krishna Cult in Bengal. II. He believes that through love and devotion, song and dance, a devotee can feel the presence of God? Which is/are correct statement (s)?
A) Only I
B) Only II
C) Both I & II
D) Neither I nor II


I. He advocated prabattimarga or path of self-surrender to God.

II. He propagated ‘Dvaita or dualism of Jivatma and Paramatma’.
Which is/are correct statement (s)?

28. Who among the following Bhakti Saint said that “Abide pure amidst the impurities of the world”?
A) Vallabhacharya
B) Madhav
C) Guru Nanak
D) Chaitanya

29. Bhakti Saint who was contemporary of Sivaji?
A) Namadev
B) Ekanatha
C) Tukaram
D) Gnanadeva

30. Who was among the following Bhakti saints gave a new orientation of Hinduism through his doctrine of Advaita or Monism?
A) Ramanuja
B) Sankara
C) Guru Nanak
D) Chaitanya

33. Consider the following statements:
I. KaraikkalAmmaiyar, a devotee of Shiva, adopted the path of extreme asceticism in order to attain her goal.
II. Andal and KaraikkalAmmaiyar renounced their social obligations, but did not join an alternative order or become nuns.
Which of the following statement(s) is/are correct about the women devotees of the period?
A) Only I
B) Only II
C) Both I & II
D) All of the above

34. Consider the following statements:
I. In the course of the evolution of forms of worship, in many instances, poet-saints emerged as leaders around whom there developed a community of devotees.
II. Brahmanas remained important intermediaries between gods and devotees in several forms of bhakti.
III. At a different level, historians of religion often classify bhakti traditions into two broad categories: saguna (with attributes) and nirguna (without attributes).
Which of the following statement(s) is/are correct about the early traditions of Bhakti?
A) Only I
B) I and II
C) I and III
D) All of the above

37. Consider the following statements:
I. Some of the earliest bhakti movements c sixth century) were led by the Alvars (literally, those who are “immersed” in devotion to Vishnu) and Nayanars (literally, leaders who were devotees of Shiva).
II. They travelled from place to place singing hymns in Tamil in praise of their gods. III. During their travels the Alvars and Nayanars identified certain shrines as abodes of their chosen deities.
Which of the following statement(s) is/are correct about Alvars and Nayanars?
A) Only I
B) I and II
C) I and III
D) All of the above