In between 17th and 18th century era was known as modern history of India; in this duration There was very revolutionary changes in the social, political and the economic life of the country. For the same we are going to give some most important question and answers of following era. These Modern History GK questions are very useful for those candidates who want to prepare for the various government as well as private sector jobs; where the examiner asked such types of questions for the history knowledge.

2. Who said that “My ultimate aim is to wipe every tear from every eye”?
A) Lord Curzon
B) Mahatma Gandhi
C) Jawahar Lal Nehru
D) DayaNandSaraswati

4. Who was the supreme body in the Britain at the time of commencement of the Government of India Act- 1858?
A) Queen Victoria
B) The British Parliament
C) Government of Britan
D) None of these 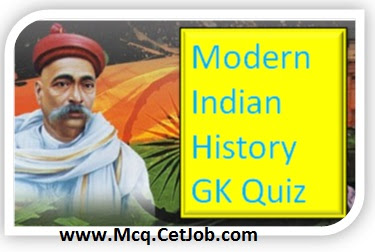 8. Which of the following is Not matched correctly?
A) Parrot of India: Amir Khusro
B) Scourge of God: Chengiz khan
C) Strong man of India: Sardar Patel
D) Father of Indian Unrest: Abdul Gaffar Khan


10. Who was the monarch of Britain at the time of commencement of the Government of India Act, 1858?
A) William IV
B) Victoria
C) Edward VII
D) George V
Modern History GK Quiz
11. Who led the Bardoli Satyagraha in 1928?
A) Morarji Desai
B) M. K. Gandhi
C) Mahadev Desai
D) Vallabhbhai Patel

14. Consider the following statement (s) related to the Nehru Report?

I. It favored Dominion Status.
II. It favored a federal system.
III. It rejected the system of Communal Electorate.
IV. It was against the setting up of a Supreme Court. Which of the above statement(s) is/are correct?
Codes:
A) I & IV
B) I & III
C) II, III & IV
D) I, II & III


15. Where did Gandhiji form the Satyagarh Sabha?
A) Bombay
B) Calcutta
C) Poona
D) Nagpur

18. Which of the following event was the reason for suspension of the Non-Cooperation Movement?
A) The non Co-operators were not enthusiastic
B) The leaders like Subhas Chandra Bose were against it
C) Gandhiji bowed to the pressure of the British government
D) Chauri Chaura incident

19. Which of the following incident ended the historic fast of Gandhi?
A) Poona Pact
B) Issue of White Paper
C) Gandhi-Irwin Pact
D) Arrival of Simon Commission

23. Who among the following was the counter part of Tipu Sultan during the Treaty of Seringapatnam?
A) Warren Hastings
B) Robert Clive
C) Cornwallis
D) Dalhousie

24. Consider the following according to the correct chronological order of the Governors-General during British India I. Wellesley II. Marquess of Hastings III. Amherst IV. Bentinck Select the correct answer from the codes given below:
A) I, II, III & IV
B) II, I, IV & III
C) I, III, II & IV
D) III, I, II & IV

25. Who was the Viceroy when the Jallianwala Bagh Massacre took place?
A) Hardinge-II
B) Chelmsford
C) Reading
D) Irwin

26. Which of the following British official associated with the local self-government?
A) Lord Mayo
B) Lord Dufferin
C) Lord Northbrook
D) Lord Ripon

29. Who among the following Governors-General repealed the Vernacular Press Act of Lytton?
A) Northbrook
B) Dufferin
C) Elgin-II
D) Ripon