As we know that the 18th century reforms was the first battle of India against the Britishers. After the revolts Britishers and others was reform Indian culture as well as society. For the 18th Century Revolts and Reform issues we are going to share some most important multiple choice questions i.e. 18th Century Revolts and Reform GK Questions for those students who want to prepare for the various exams like UPSC, PSc, SSC, Bank PO, TET, Vyapam, grade 1, preliminary exams etc.

2. Which of the following were the main aims of Satyashodhak Samaj? I. Social service II. Spread of education among women and lower caste III. Complete abolition of caste system and inequalities Options are-
A) Only II
B) I and II
C) II and III
D) All the above 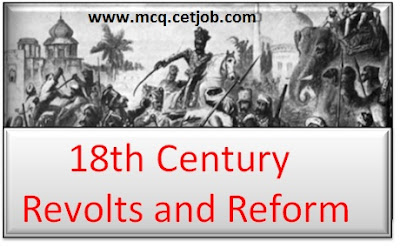 3. Aravippuram movement which is considered as a precursor to all south Indian socio religious reform movement started in which of the following places?
A) Tamil Nadu
B) Kerala
C) Andra Pradesh
D) Karnataka

4. The following are the lessons taught to masses i.e. Muslim women in particular
A) Urged the Muslims to give up medieval customs and ways of thought and behavior
B) Removal of purdah and spread of education
C) Both A and B
D) None of the above.

6. Consider the following statement (s) related to the administrative causes of 1857 revolt. I. Deprivation of the traditional ruling classes of their luxury due to the establishment of the company's suzerainty over the Indian states; II. Introduction of new and revenue system which snatched the land from cultivator and gave it to the moneylender or traitor. III. Lord Canning's announcement to that Mughals would lose the title of King and be mere Princess. Which is/are correct statement(s)?
A) Only I
B) Only II
C) Both I and II
D) Both I and III

7. Which of the following is one of the social reasons for 1857 revolt?
A) The English could not establish any social relationship with the Indians.
B) The racial arrogance of the British created a difference between the rulers and the rule
C) Both A & B
D) The company’s trade policy destroyed Indian handicrafts.

8. Who was the prominent leader in Lucknow during the Revolt of 1857?
A) Begum Hazrat Mahal
B) Rani Laxmi Bai
C) Kuar Singh
D) Bahadur Shah Zafar

9. What was the role of Tatia Tope in 1857 mutiny? I. He was commander-in-chief of the army of Nana Saheb II. He organized Bhils of Panchamahal region against the British III. He helped Begum Hazrat Mahal to capture Awadh. Codes:
A) II only
B) I and II only
C) II and III only
D) All of the above

10. Consider the following statements related to the cause of 1857 revolt. I. It was a great disparity in salaries between the Indian and European soldiers. II. The Indian sepoys were treated with contempt by their European officers. III. The sepoys were sent to distant parts of the empire, but were not paid any extra allowance. Which is/are correct statements?
A) Only I
B) Only II
C) Both I and II
D) I, II and III

11. Who among the following British Officials suppressed the Revolt of Jhansi?
A) Colin Campbell,
B) Henry Havelock
C) Henry Lawrence
D) Hugh Rose

12. Who was the governor-general during the Revolt of 1857?
A) Lord Canning
B) Lord Irwin
C) Lord Lytton
D) Lord Willington

15. Who is the author of the book”The First Indian War of Independence- 1857-59”?
A) Karl Marx
B) Syed Ahmad Khan
C) R. Mazumdar
D) S. N. Sen
18th Century Revolts and Reform GK MCQ
16. Which of the following principle propagated by Aligarh school which helped in bringing reforms in Muslims? I. Intolerance to other religions and religious texts II. Quran was the only authoritative work for Islam and all others are secondary. Therefore said belief in only Islam III. Incorporate modern western thought Options are-
A) Only I
B) Both I and II
C) Both II and III
D) All the above

17. Aligarh Movement towards the end revented its followers from joining the national movement. Which of the following reasons made it to take this decision though it initially propagated for unity?
A) It felt that immediate political progress was not possible and British Government couldn’t be easily dislodged
B) Indians are educationally forward so in order to suppress them their activities need to discouraged
C) Gain support of British officials
D) National movement is waste of time so should concentrate on other works

19. Who was the founder of Satyashodhak Samaj?

20. Which of the following is not correct about Arya Samaj?
A) The Arya Samajists opposed child marriages and encouraged remarriage of widows.
B) It was founded in 1875.
C) Its main motive was to promote faith in one God
D) None of the above is correct.

21. Where was the Devdasi System prevailed in India?
A) Southern India
B) Northern India
C) East India
D) West India

23. What was the original name of Dayananda Saraswati?
A) Malku das
B) Mul Shankara
C) Narendra
D) Dadu

25. Who advocated the concept of one caste, one religion and one God’ for all?
A) Mahatma Gandhi
B) Narayan Guru
C) Periyar
D) Swami Vivekananda

26. Who is the author of the book “Satyarth Prakash”?
A) Dayanand Saraswati
B) Rajaram Mohan Ray
C) Mahadev Govind Ranade
D) Ramakrishna Bhandarkar

27. Where was Narayana Guru born?
A) Kerala
B) Maharashtra
C) Bengal
D) Punjab

28. What was the contribution of Sayyid Ahmad Khan towards education of Muslims?
I. Brought translation of books to Urdu
II. Founded Aligarh Muhammedan Anglo-Oriental College for spreading western sciences
III. Encouraged people to send their children to schools. Options are-
A) Only II
B) Only I and II
C) Only I and III
D) All the above

29. Which of the following are the reasons for which Wahabi / Walliullah movement was started?
A) Spreading education among Muslim women
B) Encouraging to give up puradh system
C) Reviving Muslim principles in response to western influences
D) Propagating Quran as the only source

30. Titu mir’s movement considered one of the Muslim reform movement mainly aimed at eradicating which of the following systems?
A) Polygamy
B) Against Hindu landlords and British indigo planters
C) Easy divorce
D) Working against Indian national movement

31. Faraizi Movement which aimed at removing social reforms in muslims started in which of the following regions?
A) East Bengal
B) Madhya Pradesh
C) Kerala
D) Delhi

32. Wahabi movement aimed to organize Muslims around two fold ideas, which of the following forms the ideas among them?
I. Harmony among 4 schools of Muslim which were divided at that time
II. Recognition of the role of individual conscience in religion as conflicting interpretations were derived from quran and other practices Options are-
A) Only I
B) Only II
C) Both I and II
D) None of the above stated

33. Which of the following statements regarding Ahmadiya Movement is/are correct?
I. Founded by Mirza Ghulam Ahmed
II. It described itself as standard bearer of Mohammedan Renaissance
III. Based itself on the principles of Brahmo Samaj
IV. Opposed jihad and worked for spreading western liberal education among Indian Muslims Options are-
A) Only I and II
B) Only I and IV
C) Only I II and IV
D) All the above are correct

34. The Servants of Indian Society started by Gopal Krishna Gokhale was set up with which of the following objectives?
A) Prepare masses for selfless cause of country and devote their lives if needed
B) Train national missionaries for the service of country
C) Both the above statement
D) Reorganization of Indian society on rational principles

35. Which of the following statements regarding Gyana Prasarak Mandalis or student literary and scientific societies is / are correct?
I. Formed by common people to educate youth
II. Had two branches Marathi and Guajarati
III. Aimed to start schools for girls.
IV. Organized lectures to propagate their ideas Options are-
A) I and II only
B) I III and IV only
C) II and III only
D) II III and IV

36. Sri Narayana Guru Swamy initiated a programme of action called Sri Narayana Guru Dharma Paripalana yogam which took up issues regarding depressed classes, contains which of the issues?
I. Encouraging inter caste marriages
II. Right of admission to public schools
III. Recruitment to government schools
IV. Access to temples and roads Options are-
A) I II and III
B) II III and IV
C) I III and IV
D) II III and IV

38. Paramahamsa Mandali primarily aimed at breaking caste rules was founded in which of the following places
A) Maharashtra
B) Kerala
C) Tamil Nadu
D) Gujarat

39. Which of the means adopted under Self Respect Movement?
I. Violent protests against upper classes
II. Undermine position of Brahmin priests by formalizing weddings without them
III. Boycott of temples and places of Brahmin residence
Options are-
A) I and III
B) Only II
C) Only III
D) All the above

40. Temple entry movement started mainly in Kerala aimed at which of the following
A) Allowing untouchables to Hindu temples and roads
B) Keeping the monopoly of temples to Brahmin class
C) Allowing women to enter temple
D) Sanskrit lessons to be imparted only to Brahmin family members and others to be devoid of it in order to preserve its purity.
Educational portal Maths Short Tricks
quiz on revolt of 1857, 1857 revolt quiz in hindi, questions on tribes of india, socio religious reform movements mcqs, upsc mains questions on revolt of 1857, peasant movements in india mcq, objective questions on tribes of india, mcq on tribes of india,
Posted by Dr IM
Labels: 18th Century GK Questions, Indian History GK MCQ In English, Modern History GK Quiz
Email ThisBlogThis!Share to TwitterShare to Facebook
at 09:05