In this Chemistry quiz article we are going to share some Chemistry study material and some multiple-choice questions of solution chapter which having some topics like Solubility, Method of expressing concentration of solution, Colligative properties, Lowering of vapour pressure, Ideal and Non-ideal solution, Azeotropic mixture, Osmosis and Osmotic pressure of the solution, Elevation of boiling point of the solvent,  and Depression of freezing point of the solvent.

“A solution is a mixture in which substances are intermixed so intimately that they can not be observed as separate components”. The dispersed phase or the substance which is to be dissolved is called solute, while the dispersion medium in which the solute is dispersed to get a homogenous mixture is called the solvent.
Solubility
“Solubility of a substance may be defined as the amount of solute dissolved in  100gms of a solvent to form a saturated solution at a given temperature”. A saturated solution is a solution that contains at a given temperature as much solute as it can hold in the presence of dissolving solvent. Any solution may contain less solute than would be necessary to saturate it. Such a solution is known as the unsaturated solution. When the solution contains more solute than would be necessary to saturate it then it is termed as a supersaturated solution.

2. The statement “ The mass of a gas dissolved in a given mass of a solvent at any temperature is proportional to the pressure of the gas above the solvent” is
(a) Dalton’s Law of Partial Pressures
(b) Law of Mass Action
(c) Henry’s Law
(d) None of these
Sol:  C

3. Which is correct about Henry’s law
(a) The gas in contact with the liquid should behave as an ideal gas
(b) There should not be any chemical interaction between the gas and liquid
(c) The pressure applied should be high
(d) All of these
Sol:  B

Method of expressing the concentration of the solution


13. Which of the following modes of expressing concentration is independent of temperature
(a) Molarity (b) Molality
(c) Formality (d) Normality
Sol:  B

19. Which of the following modes of expressing concentration is independent of temperature
(a) Molarity (b) Molality
(c) Formality (d) Normality
Sol:  B

26. Which of the following is not a colligative property
(a) Optical activity
(b) Elevation in boiling point
(c) Osmotic pressure
(d) Lowering of vapour pressure


27. Colligative properties of a solution depends upon
(a) Nature of both solvent and solute
(b) The relative number of solute and solvent particles
(c) Nature of solute only
(d) Nature of solvent only
Sol:  B

28. For a solution of volatile liquids the partial vapour pressure of each component in solution is directly proportional to
(a) Molarity
(b) Mole fraction
(c) Molality
(d) Normality
SOL : B

29. “The relative lowering of the vapour pressure is equal to the mole fraction of the solute.” This law is called
(a) Henry's law
(b) Raoult's law
(c) Ostwald's law
(d) Arrhenius's law
SOL :  B

38. Among the following substances the lowest vapour pressure is exerted by
(a) Water
(b) Mercury
(c) Kerosene
(d) Rectified spirit

SOL :   (a) When vapour pressure of solvent decreases, then the boiling point of solvent increases.

45. Which of the following liquid pairs shows a positive deviation from Raoult's law
(a) Water-nitric acid
(b) Benzene-methanol
(c) Water-hydrochloric acid
(d) Acetone-chloroform
SOL :   B 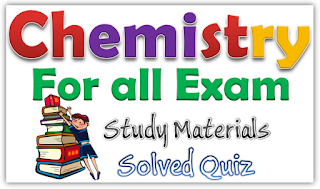 54. Azeotropic mixture are
(a) Constant temperature boiling mixtures
(b) Those which boils at different temperatures
(c) Mixture of two solids
(d) None of the above
SOL:  A

55. A mixture of two completely miscible non-ideal liquids which distil as such without change in its composition at a constant temperature as though it were a pure liquid. This mixture is known as
(a) Binary liquid mixture
(b) Azeotropic mixture
(c) Eutectic mixture
(d) Ideal mixture

Osmosis and Osmotic pressure of the solution Quiz

56. Which of the following colligative properties can provide molar mass of proteins (or polymers or colloids) with greater precision
(a) Relative lowering of vapour pressure
(b) Elevation of boiling point
(c) Depression in freezing point
(d) Osmotic pressure
SOL:  (d) Osmotic pressure method is especially suitable for the determination of molecular masses of macromolecules such as protein & polymer because for these substances the value of other colligative properties such as elevation in boiling point or depression in freezing point are too small to be measured on the other hand osmotic pressure of such substances are measurable.

63. Diffusion of solvent through a semi permeable membrane is called
(a) Diffusion (b) Osmosis
(c) Active absorption (d) Plasmolysis
SOL: B

64. Solutions having the same osmotic pressure under a given set of conditions are known as
(a) Hypertonic (b) Hypotonic
(c) Normal (d) Isotonic
SOL:  D

Elevation of boiling point of the solvent Quiz

69. The molal elevation constant is the ratio of the elevation in B.P. to
(a) Molarity
(b) Molality
(c) Mole fraction of solute
(d) Mole fraction of solvent
SOL:  (b)
70. The temperature, at which the vapour pressure of a liquid becomes equal to the atmospheric pressure is known as
(a) Freezing point
(b) Boiling point
(c) Absolute temperature
(d) None of these
SOL:  B

SOL:  (b) Common salt is non-volatile and rises the b.pt

Depression of freezing point of the solvent Quiz

SOL:  (a)The depression of freezing point is less than that of pure solvent and only solvent molecules solidify at the freezing point.